One question that we often come across during implementation is how we deal with “batch numbers” on “Shackles”.

These companies often come across shackles on their clients site with just a batch number on them and no other distinguishing mark. Often they may have 10 shackles with the same batch number (eg S 133). 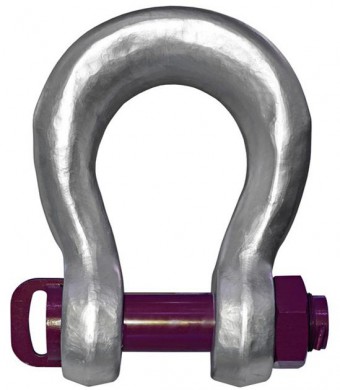 On their paper based inspection reports they would record the Batch number and place a multiple after that. (eg S133 x10)

In my opinion – this is not acceptable as the examiner cannot guarantee 100% in a court of law that he inspected the “Shackle – S133”.

1. On an inspection lasting a number of days the shackle may have moved from one location to another and actually examine the same shackle twice, while not examining another shackle.The total assets examined looks ok so everything is in order, when in actual fact the shackle not examined could have defects.

2. While colour coding may reduce the risk somewhat, the examiner is still not 100% certain that he inspected it.

For instance, if a shackle has been inspected and tagged “Blue” and becomes subsequently damaged. Rather than the operative placing it in “Quarantine”, he puts it in his storage locker in his workstation as he already has damaged a few.

It stays there for 2 years and “Blue” becomes the colour code again for inspections. A new employee takes over at that workstation and finds the shackle tagged blue presuming it is safe to use.  The shackle fails causing an accident and no one can understand it as it had “just been inspected” when in actual fact it was over 2 years since inspected last.

I think after paying for lifting equipment inspections, you would hope that the Examiner can stand up in court and state definitively that he inspected it.

UK and Irish legislation state that lifting equipment in use must have a unique identifier so you cannot use the batch number.

Most companies comply with this by stamping a unique number on the shackle in order to comply. LEEA have a similar requirement regarding a “unique identifier”  which can be viewed on link at bottom of article.

One inspection company that we had this discussion with before had an interesting story about one of his customers.

As stamping can take time to do – he was charging the customer for adding on a unique identifier. The customer refused to pay for it and told him just to inspect the shackles as given to him – whether or not they have the same serial number. He informed them that this was not in compliance with LOLER (UK Regulations).

Rather than losing the business , he done as the customer wanted and invoiced them for “Lifting Equipment Inspection”  and careful not state “LOLER Compliance Inspections”.

Often you hear that RFID (Radio Frequency Identification) can be used to uniquely identify equipment. The number that the tag gives off is unique when scanned but it CANNOT be used as the only identifier on the shackle.

The shackle must still have a unique identifier on it as a RFID tag can be switched.

Eg: A company could move an RFID tag from one shackle that has been inspected to a shackle with the same batch number but which had failed an inspection and caused an accident.

RFID’s only benefit the “Inspection Company” speeding up the identification of equipment. They still have to check that the serial number on shackle matches the one on their software to ensure it was not switched.

Often benefits of RFID listed are actually down to the “Inspection Software” not the actual tag. See our blog post “The Truth about RFID in the Lifting Industry”

Our customers generally are LEEA members or similar and do actually make the shackles unique by stamping on an additional number so it does not become an issue.

However, they can replicate their old method on our system also if they wish to continue.

I wrote this blog as it comes up time and time again and it needs to be discussed. I would love to hear how you deal with this issue or what the regulations state in your country.